One crucial use of probabilistic parsing is to solve the problem of disambiguation. CYK only represent them. 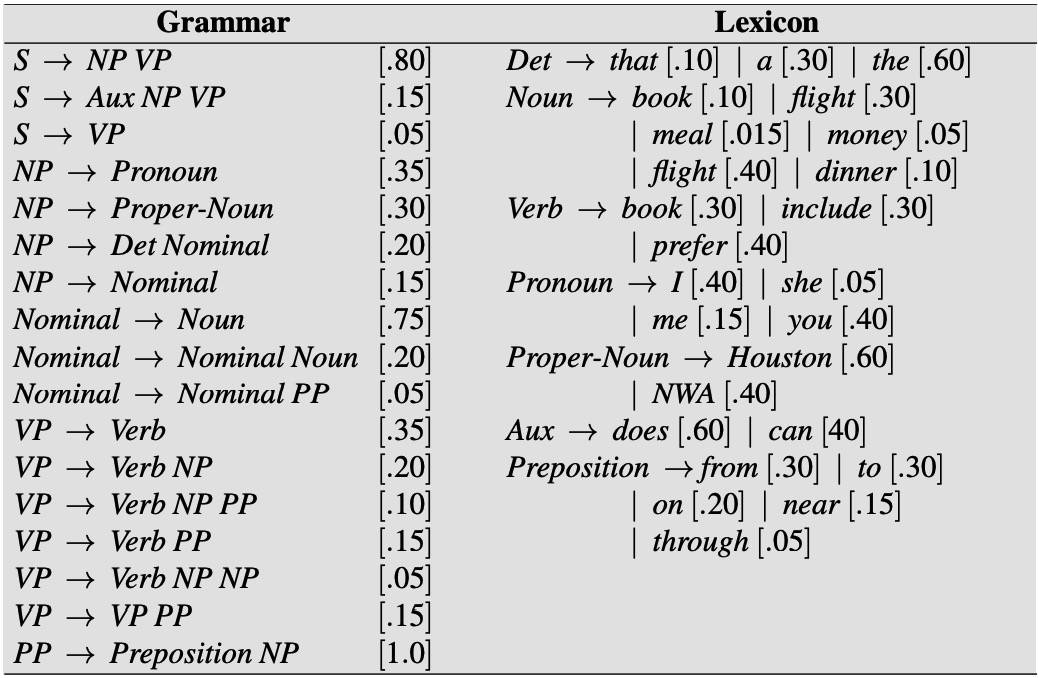 The probability of a particular parse T is defined as the product of the probabilities of all the n rules:

The string of words S is called the yield of any parse tree over S. Thus, out of all parse trees with a yield of S, the disambiguation algorithm picks the parse tree that is most probable given S:

A second attribute of a PCFG is that it assigns a probability to the string of words constituting a sentence. The probability of an ambiguous sentence is the sum of the probabilities of all the parse trees:

An additional feature of PCFGs that is useful for language modeling is their ability to assign a probability to substrings of a sentence.

We need to convert a probabilistic grammar to CNF.

Two ways to learn probabilities for the rules of a grammar:

PCFGs are incapable of modeling important structural and lexical dependencies.

One idea is to split the non-terminal into different versions. One way is to do parent annotation, in which we annotate each node with its parent in the parse tree.

To deal with cases in which parent annotation is insufficient:

Node-splitting increases the size of the grammar, reduces the amount of training data available for each grammar rule, leading to overfitting. It is important to split to just the correct level of granularity for a particular training set.

Lexicalized grammar: each non-terminal in the tree is annotated with its lexical head, like:

In the standard type of lexicalized grammar, head tag is added, too:

Probabilistic lexicalized CFG would lead to two kinds of rules:

The MLE estimate for the probability for the rule above would be:

But we can’t get good estimates because they are too specific, most rule probabilities will be 0.

Each of the symbols like L1 or R3 or H or LHS is actually a complex symbol representing the category and its head and head tag, like VP(dumped, VP).

Now, instead of computing a single MLE probability for this rule, we are going to break down this rule via a neat generative story, a slight simplification of what is called Collins Model 1.

This new generative story is that given the left-hand side, we first generate the head of the rule and then generate the dependents of the head, one by one, from the inside out. Each of these generation steps will have its own probability. A special STOP non-terminal is added at the left and right edges of the rule:

So the previous rule is estimated as:

Each of these probabilities can be estimated from much smaller amounts of data than the full probability.

More generally, if H is a head word hw and head tag ht, lw/lt and rw/rt are the word/tag on the left and right, and P is the parent, then the probability of an entire rule can be expressed as:

We stop generating once we’ve generated a STOP token.

The distance measure is a function of the sequence of words below the previous modifiers (i.e., the words that are the yield of each modifier non-terminal we have already generated on the left).

The simplest version of this distance measure is just a tuple of two binary features based on the surface string below these previous dependencies:

Finally, smoothing is as important for statistical parsers as it was for N-gram models. The Collins model addresses this problem by interpolating three backed-off models: fully lexicalized (conditioning on
the headword), backing off to just the head tag, and altogether unlexicalized.

In fact there are no “backoff” but interpolated models, e1, e2, e3 are the maximum likelihood estimates above. λ1, λ2 are set to implement Witten-Bell discounting.

Lexicalized grammar frameworks such as CCG pose problems for which the phrase based methods we’ve been discussing are not particularly well-suited.

X/Y Y ⇒ X applies a function to its argument on the right, forward function application

The large number of lexical categories available for each word, combined with the promiscuity of CCG’s combinatoric rules, leads to an explosion in the number of (mostly useless) constituents added to the parsing table. The key to managing this explosion is to accurately assess and exploit the most likely lexical categories possible for each word — a process called supertagging.

There are two approaches to CCG parsing that make use of supertags below.

Supertagging is the corresponding task for highly lexicalized grammar frameworks, where the assigned tags often dictate much of the derivation for a sentence.

It relies on treebanks such as CCGbank:

Commonly, a probability distribution over the possible supertags for each word will return, instead of the most probability.

In fact, DNN model is much easier in practice. Besides this, we can easily add many more mechanisms, for instance, attention.

CCG Parsing using the A* Algorithm

Use PARSEVAL measures which were proposed by Black et al. (1991).

F-measure is often used, can be seen here. An additional metric is used for each sentence: cross-brackets.

For comparing parsers that use different grammars, the canonical implementation of the PARSEVAL metrics is called evalb (Sekine and Collins, 1997).

In lexically-oriented grammars, such as CCG and LFG, use alternative evaluation metrics based on measuring the precision and recall of labeled dependencies, where the labels indicate the grammatical relations (Lin 1995, Carroll et al. 1998, Collins et al. 1999).
The reason we use components is that it gives us a more fine-grained metric. This is especially true for long sentences, where most parsers don’t get a perfect parse.

Recent studies suggest that there are at least two ways in which humans apply probabilistic parsing algorithms: