This chapter is devoted to the topic of context-free grammars. They are integral to many computational applications, including grammar checking, semantic interpretation, dialogue understanding, and machine translation.

The fundamental notion underlying the idea of constituency is that of abstraction — groups of words behaving as a single units, or constituents.

Context-Free Grammar or CFG are also called Phrase-Structure Grammars, the formalism is equivalent to Backus-Naur Form, or BNF.

A CFG consists of a set of rules or productions, each of which expresses the ways that symbols of the language can be grouped and ordered together, and a lexicon of words and symbols.

Notice that in the lexicon, the non-terminal associated with each word is its lexical category, or POS.

A CFG can be thought of in two ways:

A derivation of the string of words can be represented by a parse tree. The formal language defined by a CFG is the set of strings that are derivable from the designated start symbol. 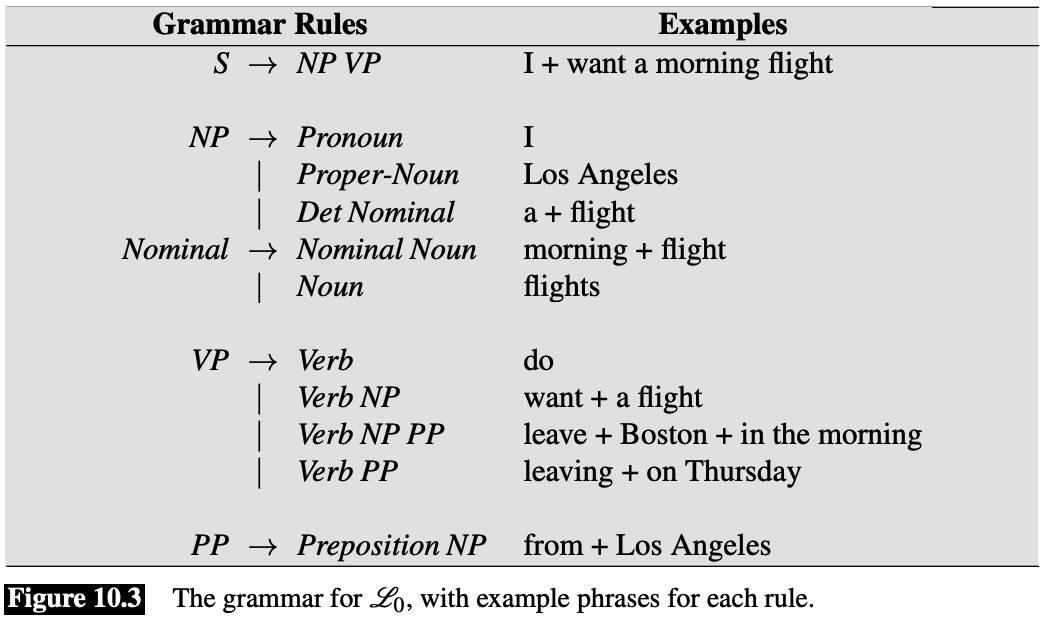 Sentences (strings of words) that can be derived by a grammar are in the formal language defined by that grammar, and are called grammatical.

Sentences that cannot be derived by a given formal grammar are not in the language defined by that grammar and are referred to as ungrammatical.

In linguistics, the use of formal languages to model natural languages is called generative grammar since the language is defined by the set of possible sentences “generated” by the grammar.

Derivation is then a generalization of direct derivation:

We say that α1 derives αm.

The language LG generated by a grammar G as the set of strings composed of terminal symbols that can be derived from the designated start symbol S:

Mapping from a string of words to its parse tree is called syntactic parsing.

Some Grammar Rules for English

S rules are intended to account for entire sentences that stand alone as fundamental units of discourse. However, S can also occur on the right-hand side of grammar rules and hence can be embedded within larger sentences.

A clause often describe as forming a complete thought, of which S is a node of the parse tree below which the main verb of the S has all of its arguments.

There are three most frequent types of noun phrases: pronouns, proper nouns and NP→Det Nominal construction. Here focus the last type which consists of a head, the central noun in the noun phrase, along with various modifiers that can occur before or after the head noun.

The verb phrase consists of the verb and a number of other constituents.

Verbs are compatible with different kinds of complements. In traditional grammar:

Modern grammars subcategorize verbs into as many as 100 subcategories. A verb subcategorizes for an NP or a non-finite VP (which are called complements of the verb). The possible sets of complements are called the subcategorization frame for the verb. We can capture the association between verbs and their complements by making separate subtypes of the class Verb. The problem is the significant increase in the number of rules and the associated loss of generality.

A coordinate noun phrase can consist of two other noun phrases separated by a conjunction. The meta-rules is like: X → X and X (X stands for any non-terminal rather than a nonterminal itself).

A corpus where every sentence in the collection is paired with a corresponding parse tree, such a syntactically annotated corpus is called a treebank.

A feature of Penn Treebanks: the use of traces (-NONE- nodes) to mark long-distance dependencies or syntactic movement.

The head is the word in the phrase that is grammatically the most important. Heads are passed up the parse tree; thus, each non-terminal in a parse tree is annotated with a single word, which is its lexical head.

An alternative approach to finding a head is used in most practical computational systems. Instead of specifying head rules in the grammar itself, heads are identified dynamically in the context of trees for specific sentences.

It is sometimes useful to have a normal form for grammars, in which each of the productions takes a particular form. For example, a context-free grammar is in Chomsky normal form (CNF) if it is ε-free and if in addition each production is either of the form A → B C (two non-terminal symbols) or A → a (one terminal symbol). CNF grammars are binary branching, that is they have binary trees (down to the pre-lexical nodes).

Any context-free grammar can be converted into a weakly equivalent Chomsky normal form grammar.

The generation of a symbol A with a potentially infinite sequence of symbols B with a rule of the form A → A B is known as Chomsky-adjunction.

The approach to grammar presented thus far emphasizes phrase-structure rules while minimizing the role of the lexicon. However, as we saw in the discussions of agreement, subcategorization, and long distance dependencies, this approach leads to solutions that are cumbersome at best, yielding grammars that are redundant, hard to manage, and brittle.

To overcome these issues, numerous alternative approaches have been developed that all share the common theme of making better use of the lexicon:

These approaches differ with respect to how lexicalized they are — the degree to which they rely on the lexicon as opposed to phrase structure rules to capture facts about the language.

The categorial approach consists of three major elements: a set of categories, a lexicon that associates words with categories, and a set of rules that govern how categories combine in context.

Categories are either atomic elements or single-argument functions that return a category as a value when provided with a desired category as argument.

A set of categories L for a grammar:

The set of atomic categories is typically very small and includes familiar elements such as sentences and noun phrases. Functional categories include verb phrases and complex noun phrases among others.

The lexicon in a categorial approach consists of assignments of categories to words. These assignments can either be to atomic or functional categories, and due to lexical ambiguity words can be assigned to multiple categories.

The result of applying either of these rules is the category specified as the value of the function being applied.

The basic categorial approach does not give us any more expressive power than we had with traditional CFG rules; it just moves information from the grammar to the lexicon. To move beyond these limitations CCG includes operations that operate over functions:

It was created by automatically translating phrase-structure trees from the Penn Treebank via a rule-based approach.