Problematic of the sliding window in general NN:

RNN is a class of networks designed to address these problems by processing sequences explicitly as sequences, allowing us to handle variable length inputs without the use of arbitrary fixed-sized windows.

A RNN is any network that contains a cycle within its network connections. That is, any network where the value of a unit is directly or indirectly, dependent on its own output as an input.

The key difference from a feed-forward network lies in the recurrent link, which augments the input to the hidden layer with the activation value of the hidden layer from the preceding point in time.

The hidden layer from the previous time-step provides a form of memory, or context, that encodes earlier processing (extending back to the beginning of the sequence) and informs the decisions to be made at later points in time.

It is not all different from non-recurrent in reality, the most significant addition lies in the new set of weights U that connect the hidden layer from the previous time-step to the current layer.

The weights are shared across the various time-steps.

For applications that involve much longer input sequences, we unroll the input into manageable fixed-length segments and treat each segment as a distinct training item. This approach is called Truncated Backpropagation Through Time (TBTT).

Stacked RNNs consist of multiple networks where the output of one layer serves as the input to a subsequent layer. One reason is to induce representations at differing levels of abstraction across layers.

Then combined into a single representation (element-wise addition or multiplication):

In practice, RNN is hard to train:

LSTM have too many parameters to train, a simpler version named GRU try to ease this training burden by collapsing the forget and add gates of LSTMs into a single update gate with a single set of weights. 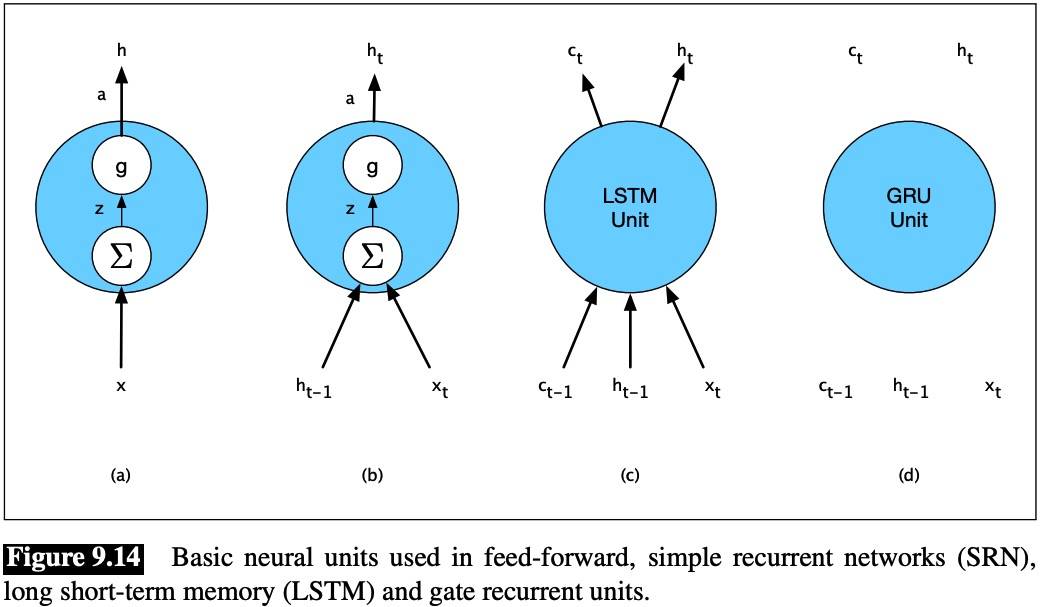 The issue of word-based embeddings: