Text categorization, the task of assigning a label or category to an entire text or document.

Probabilistic classifier additionally will tell us the probability of the observation being in the class.

Generative classifiers like naive Bayes build a model of how a class could generate some input data.

Discriminative classifiers like logistic regression instead learn what features from the input are most useful to discriminate between the different possible classes.

P(f1,f2…|c) is hard to compute directly, estimate the probability of every possible combination of features (for example, every possible set of words and positions) would require huge numbers of parameters and impossibly large training sets.

To apply the naive Bayes classifier to text, we need to consider word position:

Calculations are done in log space to avoid underflow and increase speed:

If a word only occurs in one class, the probability for this feature in the other class will be zero, then the total class is zero, no matter the other evidence. The simplest solution is Add-one smoothing:

V consists of the union of all the word types in all classes, not just the words in one class c.

The solution for unknown words (in test data) is to ignore them, remove them from the test document and not include any probability for them at all.

In most text classification applications, however, using a stop word list doesn’t improve performance, and so it is more common to make use of the entire vocabulary and not use a stop word list.

The code is here: Naive-Bayes

Accuracy is not a good metric when the goal is to discover something that is rare, or at least not completely balanced in frequency, which is a very common situation in the world.

Precision and recall, emphasize true positives: finding the things that we are supposed to be looking for.

The β weights the importance of recall and precision, based on the needs of an application.

F-measure comes from a weighted harmonic mean of precision and recall.

We combine the metric values in two ways: 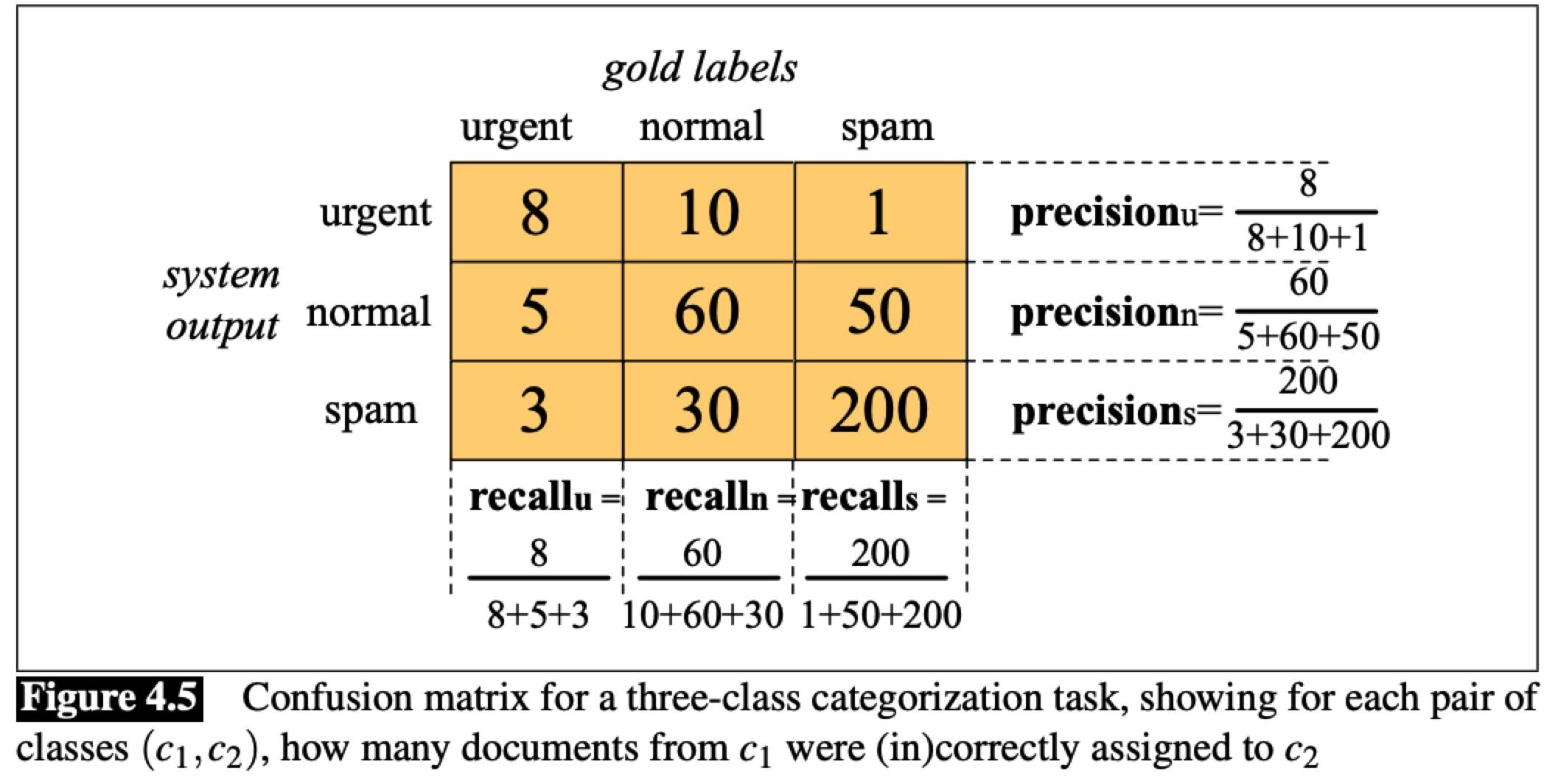 We use the development test set (devset) to tune some parameters.

If we could use all our data both for training and test, we do this by cross-validation:

Repeat times n, we get an average error rate, it is called n-fold cross-validation.

As all the data is used for test, we need the whole corpus to be blind, means we can’t examine any of the data to suggest possible features and see what’s going on. But looking at the corpus is often important.

So it is common to create a fixed training and test set, then do cross-validation inside the training set, but compute error rate the normal way in the test set. 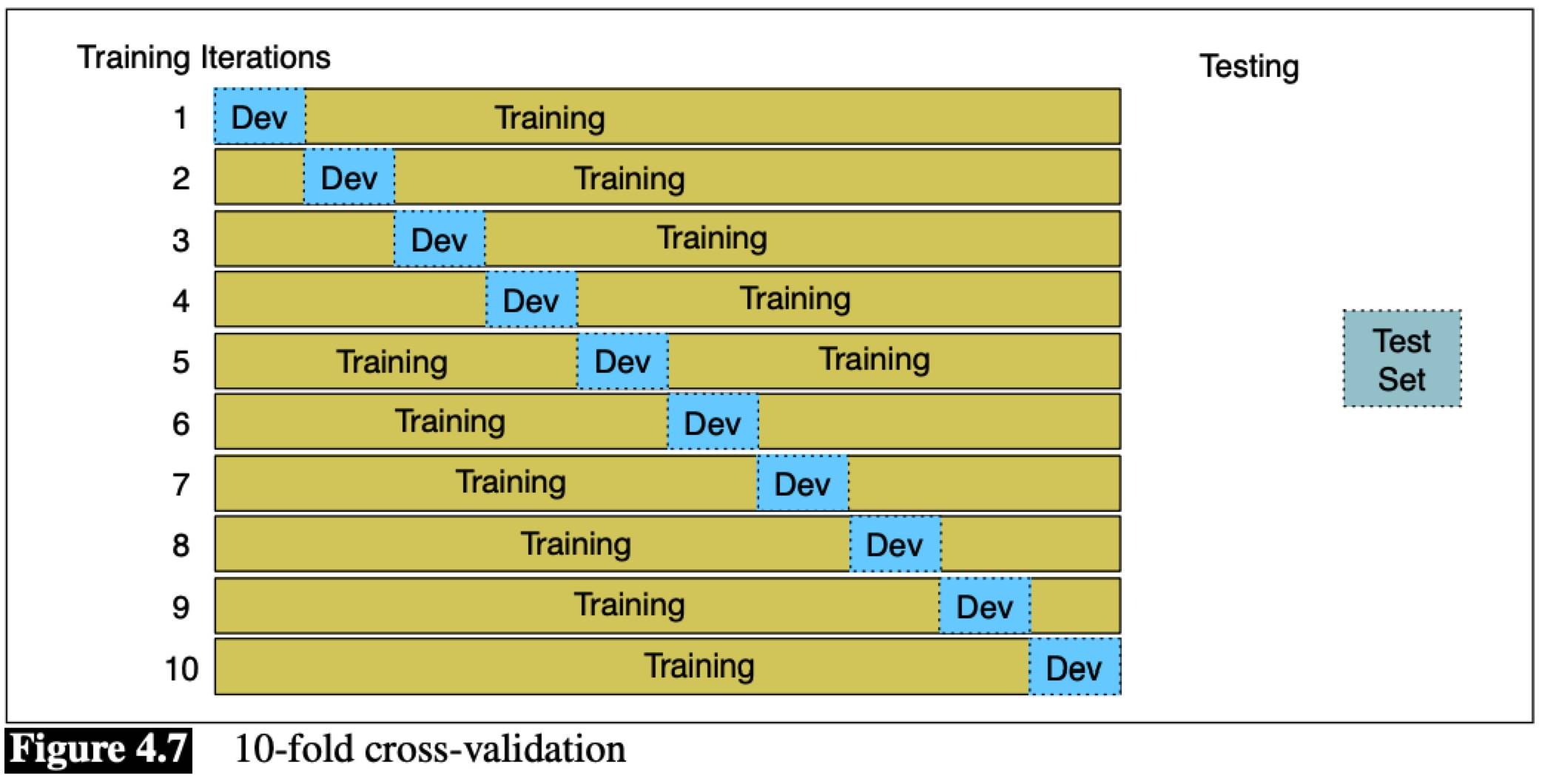 We have a test set x of n observations x = x1, x2, … xn on which A’s performance is better than B by δ(x). We need to reject the null hypothesis that A isn’t really better than B and this difference δ(x) occurred purely by chance.

In language processing we use non-parametric tests like the bootstrap test, or a similar test approximate randomization because most metrics are not normally distributed. Bootstrapping refers to repeatedly drawing large numbers of smaller samples with replacement (bootstrap samples) from an original larger sample.

The code is here: Statistical-Significance-Testing

Features are generally ranked by how informative they are about the classification decision. A very common metric is information gain which tells us how many bits of information the presence of the word gives us for guessing the class.

c_i is ith class, w- means that a document does not contain the word w​.