Recently, I wanted to build an information extraction system, so I searched for Google. However there were little Chinese articles, the quality was not so good as well. Fortunately, I found several English ones seemed well, and then the summary is here. The whole structure is based on my favorite NLP book Speech and Language Processing (use SLP instead below), also with some other materials in the reference.

By the way, this book provides actionable steps, focusing on specific actions. 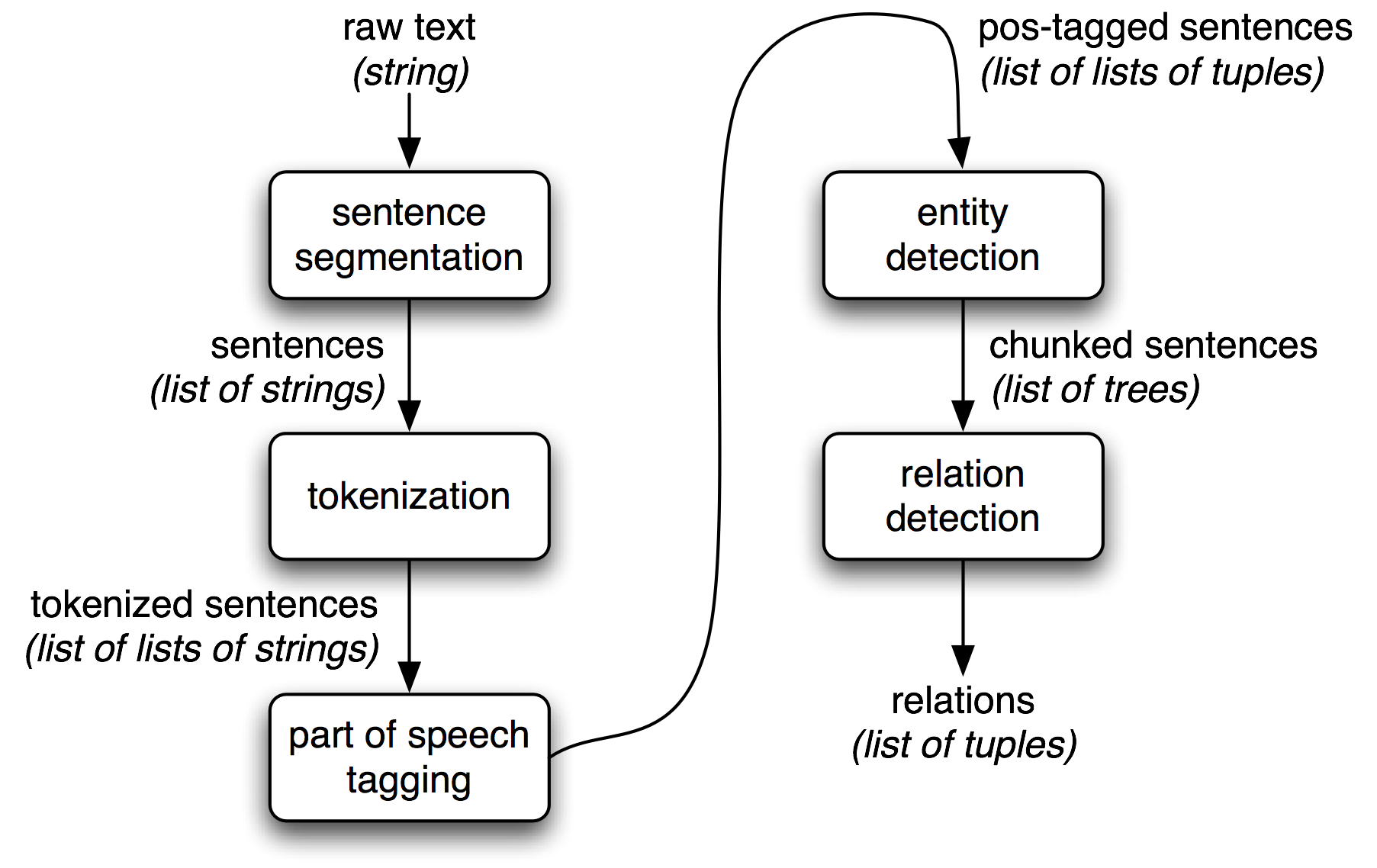 This part is mainly the basic knowledge, which comes from ch17 of Speech and Language Processing.

The first step in information extraction is to detect the entities in the text. A named entity is, roughly speaking, anything that can be referred to with a proper name: a person, a location, an organization.

The term is commonly extended to include things that aren’t entities, such as dates, times, and other kinds of temporal expressions, and even numerical expressions like prices.

Named entity recognition means finding spans of text taht constitute proper names and then classifying the type of the entity. The difficulties are:

A sequence classifier like an MEMM/CRF or a bi-LSTM is trained to label the tokens in a text with tags that indicate the presence of particular kinds of entities. Some details of data and training can be found here: 附录 — LTP 3.3 文档

A feature-based algorithm for NER

In Chinese, things become a little different, there aren’t many clear features, and Chinese text are always connected together.

A gazetteer is a list of place names, often providing millions of entriesfor locations with detailed geographical and political information. A related resource is name-lists, similar lists also contain corporations, commercial products, and all manner of things biological and mineral. While gazetteers can be quite effective, list of persons and organizations are not always helpful.

A sequence classifier like an MEMM can be trained to label new sentences. If we assume a context window that includes the two preceding and following words, then the features available to the classifier are those shown in the boxed area.

A neural algorithm for NER

A bi-LSTM output a softmax over all NER tags, but it’s insufficient, since it doesn’t allow us to impose the strong constraintsneighboring tokens have on each other. Instead a CRF layer is normally used on top of the bi-LSTM output, and the Viterbi decoding algorithm is used to decode. 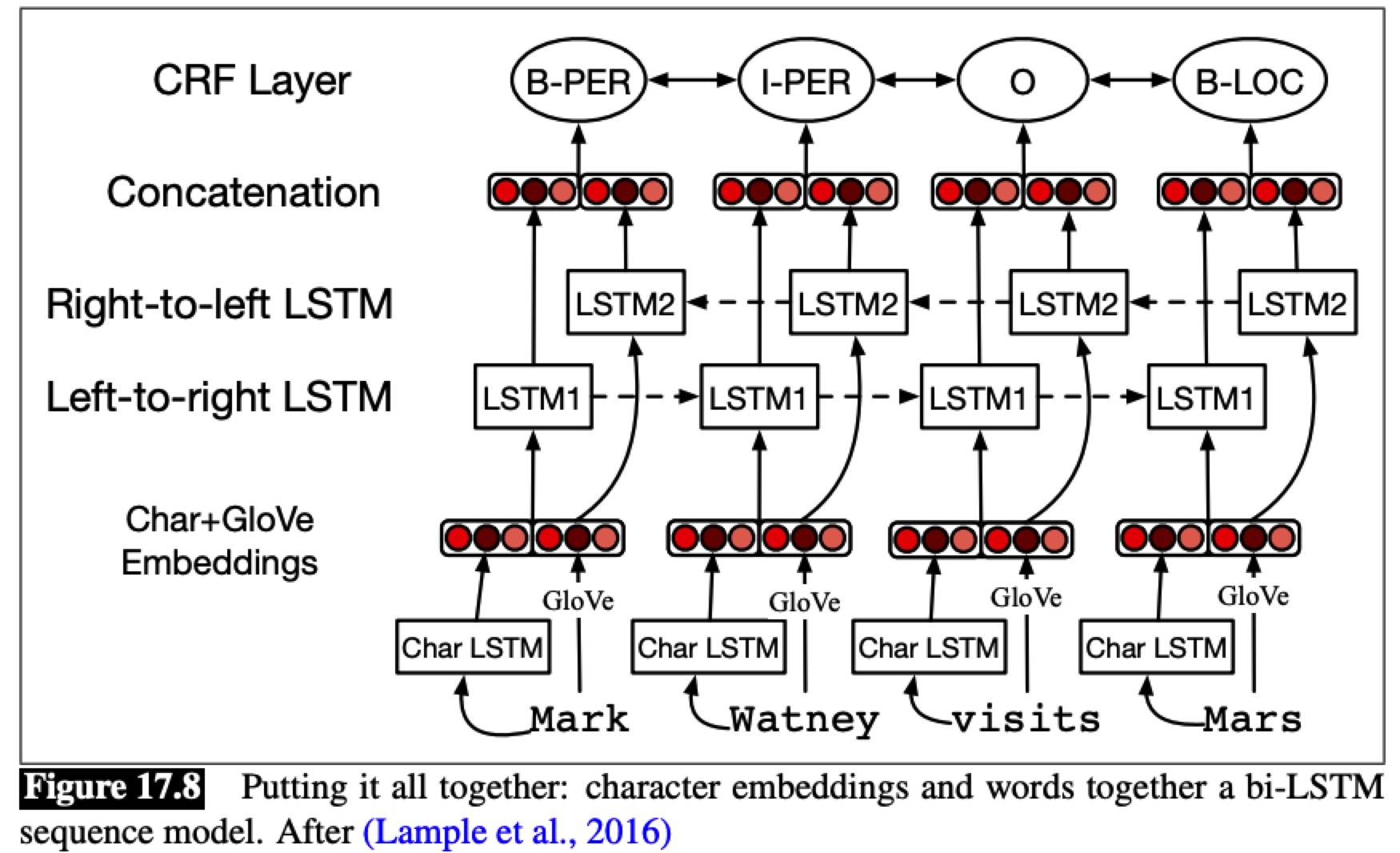 While sequence models are the norm in academic research, commercial approaches to NER are often based on pragmatic combinations of lists and rules, with smaller amount of supervised machine learning. For example SystemT: Declarative Text Understanding for Enterprise.

For named entities, the entity rather than the word is the unit of response. The fact that named entity tagging has a segmentation component which is not present in tasks like text categorization or part-of-speech tagging causes some problems with evaluation. For example, a system that labeled American but not American Airlines as an organization would cause two errors, a false positive for O and a false
negative for I-ORG.

An RDF triple is a tuple of entity-relationentity, called a subject-predicate-object expression.

The most straightforward approach has three steps:

For the feature-based classifiers like LR, RF, the most important step is to identify useful features. Consider features for classifying the relationship between American Airlines (M1) and Tim Wagner (M2) from the sentence: “American Airlines, a unit of AMR, immediately matched the move, spokesman Tim Wagner said”.

Labeling a large training set is extremely expensive and supervised models are brittle: they don’t generalize well to different text genres. So much research has focused on the semi-supervised and unsupervised approaches.

Suppose we just have a few high-precision seed patterns or a few seed tuples, that’s enough to bootstrap a classifier.

Given a document collection D, a current set of tuples T, and a proposed pattern p, we need to track two factors:

We can assess the confidence in a proposed new tuple by combining the evidence supporting it from all the patterns P’ that match that tuple in D. One way to combine such evidence is the noisy-or technique.

Assume that a given tuple is supported by a subset of the patterns in P, each with its own confidence assessed as above.

In the noisy-or model, we make two basic assumptions. First, that for a proposed tuple to be false, all of its supporting patterns must have been in error, and second, that the sources of their individual failures are
all independent.

Setting conservative confidence thresholds for the acceptance of new patterns and tuples during the bootstrapping process helps prevent the system from drifting away from the targeted relation.

It combines the advantages of bootstrapping and supervised learning, uses a large dataset to acquire a huge number of seed examples, creates lots of noisy pattern features from all these examples and then combines them in a supervised classifier.

Distant supervision can only help in extracting relations for which a large enough database already exists. To extract new relations without datasets, or relations for new domains, purely unsupervised methods must be used.

The goal of unsupervised relation extraction is to extract relations from the web when we have no labeled training data, and not even any list of relations. This task is often called open information extraction or Open IE.

The ReVerb - Open Information Extraction Software system extracts a relation from a sentence s in 4 steps:

A confidence classifier is then trained on this hand-labeled data, using features of the relation and the surrounding words.

The disadvantage is the need to map these large sets of strings into some canonical form for adding to databases or other knowledge sources. Current methods focus heavily on relations expressed with verbs, and so will miss many relations that are expressed nominally.

Semi-supervised and unsupervised methods are much more difficult to evaluate, since they extract totally new relations from the web or a large text. It’s possible to approximate (only) precision by drawing a
random sample of relations from the output, and having a human check the accuracy of each of these relations.

Times and dates are those temporal expressions, must be normalized —— converted to a standard format.

Temporal expressions are those that refer to absolute points in time, relative times, durations, and sets of these.

Rule-based approaches to temporal expression recognition use cascades of automata to recognize patterns at increasing levels of complexity.

A major difficulty is avoiding expressions that trigger false positives:

All these above are suitable for Chinese.

Normalized times are represented with the VALUE attribute from the ISO 8601 standard for encoding temporal values.

Extracting Events and their Times

Event extraction is to identify mentions of events in texts. Events are to be classified as actions, states, reporting events (say, report, tell, explain), perception events, and so on. Supervised learning for sequence models with IOB tagging. Common features like:

The temporal relation between events is classified into one of the Allen relations standard set. 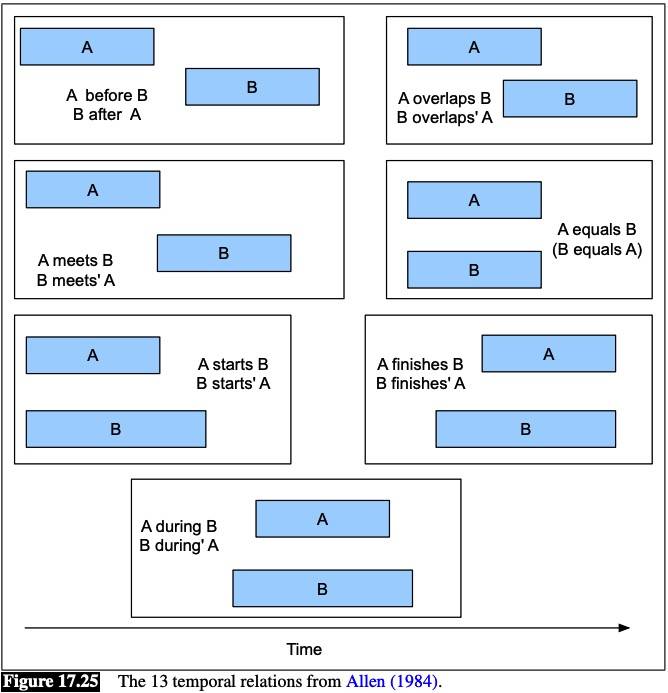 Template filling is to find documents that invoke particular scripts and then fill the slots in the associated templates with fillers extracted from the text. These slot-fillers may consist of text segments extracted directly from the text, or they may consist of concepts that have been inferred from text elements through some additional processing.

Recent work focuses on extracting templates in cases where there is no training data or even predefined templates, by inducing templates as sets of linked events: Template-Based Information Extraction without the Templates.

Early systems for dealing with complex templates were based on cascades of transducers based on hand-written rules.

The first four stages use hand-written regular expression and grammar rules to do basic tokenization, chunking, and parsing. Stage 5 then recognizes entities and events with a FST-based recognizer and inserts the recognized objects into the appropriate slots in templates. The merging algorithm, after performing coreference resolution, merges two activities that are likely to be describing the same events.

This is an example of FASTUS: A Cascaded Finite-State Transducer for Extracting Information from Natural-Language Text.

This post provides an example of specific information extraction from unstructured texts (CVs). The steps are below:

I was a little confused about the input layers, and I’ve posted a question.